1Spot Gallery is back from Summer Hiatus this September with a new exhibit! 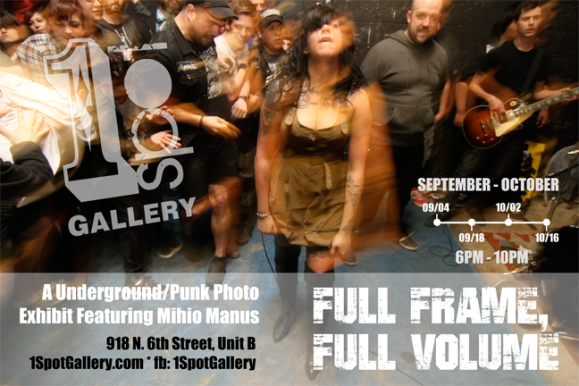 The displayed images will consist of live shots of the underground/punk music scene within the locations of Phoenix, Flagstaff and the Navajo Reservation. Included will also be portraits of spectators, bands and band members.

Mihio Manus (Navajo, Cherokee, Omaha) learned black and white photography while attending Chinle High School on the Navajo Reservation in the early 90s. His interest in photography compelled him to graduate with a Bachelor’s Degree in Photography from Northern Arizona University. While in college, Manus was exposed to the underground music scenes that existed in the cities beyond the reservation border. It was here that he sought to capture images of punk shows, bands and all those who filled the rooms of the venues. To this present day, he still keeps a camera by his side when he ventures out to catch live music. The images he has compiled document early eras in the Flagstaff punk scene as well as more recent eras in the Phoenix underground music scene. The imagery he brings forth in this exhibition captures the energy and intensity of the live shows he attends. It also provides glimpses in the personalities of those who attend the shows through portraiture. (facebook: http://tinyurl.com/pvymn83)