“It is an honor to share this work and dream with you.”

A little over a week ago, a very beautiful event happened in Arizona.
Ch’ikééh Baa Hózhó – Contemporary Native Female Arts Showcase debuted at the Navajo Nation Museum in Window Rock.
Fourteen indigenous women showcased their beautiful art; from paintings to photography, drawings and sculpture, rugs and quilts, printmaking, and a 20 foot installation piece (a first for the Museum).  Ziindi debuted the second edition of our publication.

It was the first time an all women, contemporary art show had been featured on the Navajo reservation.

It was the first time artwork from tribes other than Dine’ had ever been exhibited at the Navajo Nation Museum. 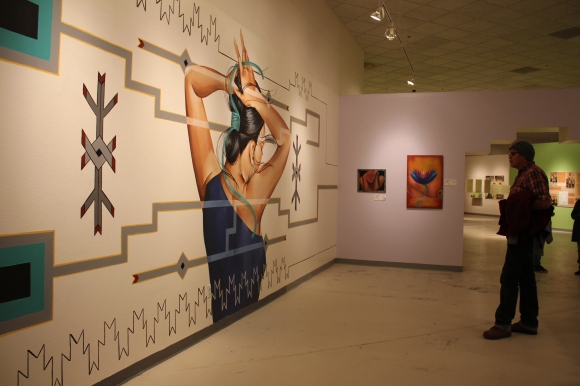 We teamed up with the Navajo Nation Museum and these talented artists; the result was magnificent.
Vice President of the Navajo Nation Rex Lee Jim gave a beautiful talk about supporting the youth in becoming artists.
A special performance was offered by Saakred, an avant-garde performance artists straight from San Antonio, Texas.
Families, friends, elders, and children all gathered to honor and celebrate these artists and their courage.
We are blessed to have your support and encouragement in fostering these spaces for our community.

Thank you for supporting Ziindi in making this happen.

See photos of the event here.

For those of you who were not able to make it, the event started with an opening reception. The director of the Navajo Nation Museum Manuelito Wheeler served as the host, and shared words of support and introduction to the show with the crowd.

“Females have kept us alive, it is only right that we encourage these young women”.

Then the Vice President of the Navajo Nation Rex Lee Jim (Navajo Nation: Rex Lee Jim) spoke beautifully and eloquently both in Diné and English about the need to support shows like this. He is a great supporter of the arts, and mentioned not only should we encourage and support our children to become doctors and lawyers, but also artists, as they are an important part of our history and our community.

Following the Vice President was Navajo Nation Museum curator Clarenda Begay, who spoke of the show and how she became connected to Ziindi and Damian Jim.
Damian Jim shared words regarding the importance of this show, and our inspiration in starting to showcase modern indigenous artists out of a need for spaces that were willing to do so.

“This a Revolutionary Show, the first ever all female show on a reservation”

Executive Director of Ziindi Michelle Ponce then spoke to the audience about the importance and courage of being a woman creating art in 2D and 3D art world dominated by men.  She thanked the artists all for your courage, “we honor you with this show”.

Michelle noted that this event was to inspire girls and boys everywhere that being an artist is possible, it is a good thing, and that the community supports them in that journey.  Right after artist Nani Chacon, who created the beautiful installation piece, spoke of her participation and role as an artist.

After closing remarks from the director Manny Wheeler, the show continued with people coming in throughout the evening.
There were families, children, elders, and youth. The Navajo Times was there to cover the event, and take pictures.
Food was served, and soft ambient music played in the background.
Some of you had tables set up with your beautiful work, and people enjoyed looking at the beautiful exhibit and the artists vendors.

Later in the evening we had a special performance by “Saakred“, 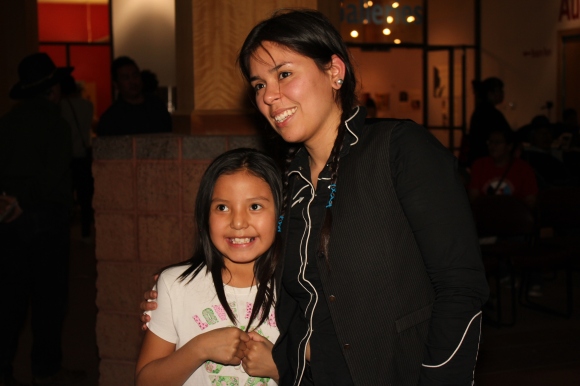 an avant-garde performance artist who drove from San Antonio, Texas (!!) to perform. Her work incorporates projected visuals, electronic sounds and beats, movement, and words into a powerful and moving performance. (Video will be available soon.)
The audience was moved and the children loved it! They ran up to her at the end of her performance to ask for autographs and ask her questions.

After Saakred’s performance, DJ Deaddisko aka Vanessa Wilde set up and played music for us all from vinyl records (thanks to Burt Benally for lending equipment) . Lights were set up, she was wonderful!

The night drew to a close around 9pm, as artists and families began to pack up and leave; it had been an inspiring and beautiful evening full of art, family, talented ladies, and an arts community that for the first time were able to see such a beautiful contemporary exhibit at the Museum.

This is the most beautiful and important art show Ziindi has had the honor to work on.

We are proud and humbled at the beauty we have shared and the community we have fostered through this process.

The show will be up until October 2013; we invite you all to come by and see the show in the upcoming months! 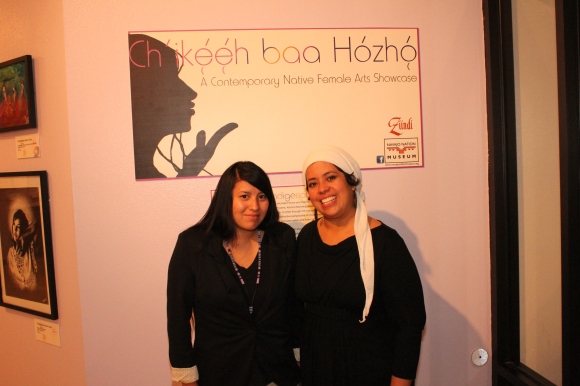